“International Survivors of Suicide Loss Day is an event in which survivors of suicide loss come together to find connection, understanding, and hope through their shared experience.”
- American Foundation for Suicide Prevention

In this post, we share a personal story by Psychiatry Assistant Professor Jasleen Chhatwal, MD, who is also the Chief Medical Officer, Director of Mood Program at Sierra Tucson. 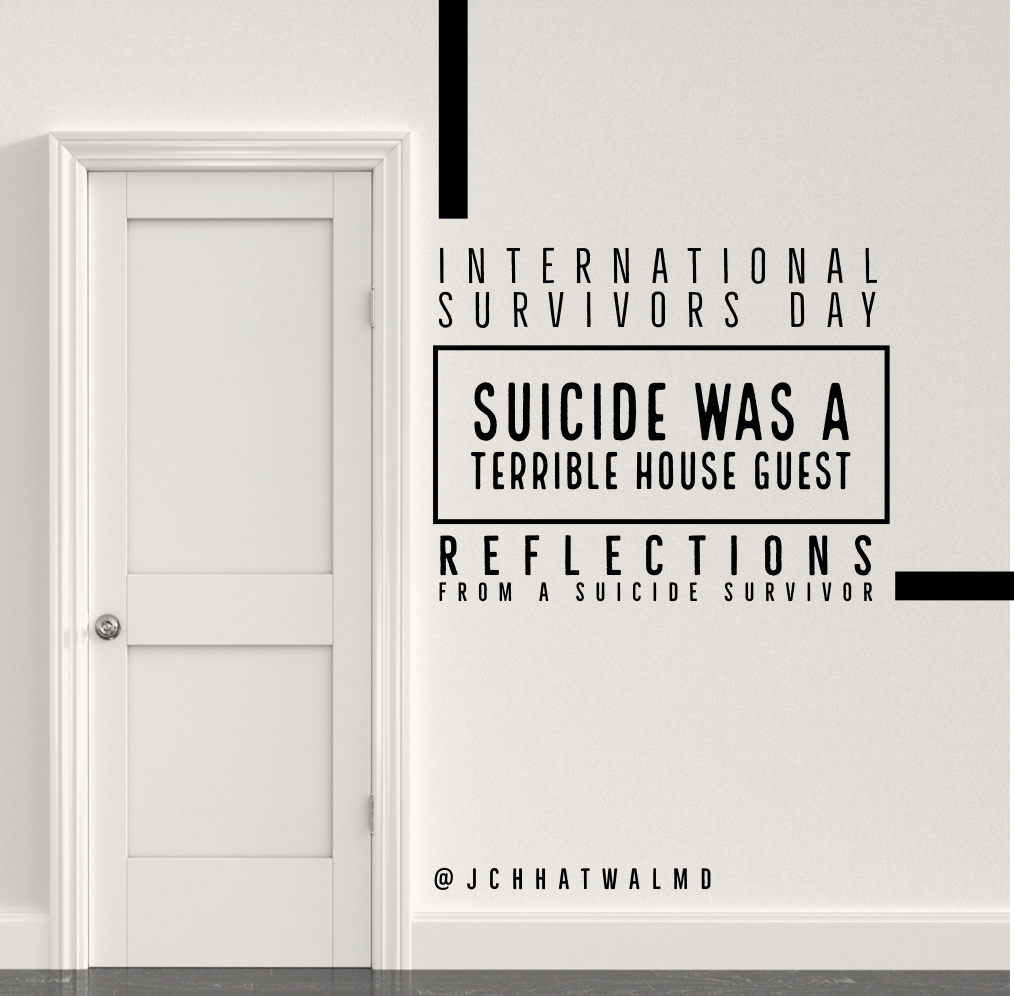 Twelve years ago, Suicide entered my life. Unannounced. He casually mentioned he was moving in with me. What? Why?

Quietly, without acknowledging my question, he unpacked his many large bags. Right there, in my living room! Out came sadness, tears, sorrow, helplessness, grief. Oh, what chaos. It was very unpleasant. My home, my sanctuary was gone. I would try to avoid him around the house.

He was a terrible houseguest.

Friends and family tried to ignore Suicide. They asked why I let him come and stay. Some even blamed me, wondering if I had unknowingly invited him. Few had the experience of having him as a guest, and even fewer were willing to talk about that experience. It was clear that most folk preferred to ignore that he existed.

Initially, Suicide really liked how much space I allowed him. I would spend time away from home, logging endless hours at work, distracting with a lot of mindless activity. I didn’t know how to address the havoc he had wrecked on my life. I even tried to move to a new home. Lo and behold, he moved with me! I had never experienced anything like this before.

Begrudgingly, I began to acknowledge that I would have to be more active in dealing with him. He wasn’t going to change his ways without confrontation. I started to reach out to friends and family asking how they dealt with bad houseguests. I tried to separate out the problems caused by Suicide’s presence, and those occurring due to his baggage.

Over time, I gathered the courage to start addressing my concerns with Suicide. I told him I couldn’t live my life with his baggage strewn about my space. I needed to tidy up my home. Learning through others’ experience, I started down the path to putting away sadness, sorrow and tears. To organize helplessness, I had to go find my friend Purpose who has been most helpful.

Finally, came the time to have the most difficult conversation I have ever had. Asking Suicide to move into a smaller space. I worried he would be enraged and undo all the work I had done tidying up his baggage. Stubborn as he is, I had to keep going back confronting him and setting boundaries. It took the help of close friends, some family members and counselors to have these hard conversations with Suicide. Very gradually, pouting and complaining, he moved into a side room.

Some days we can co-exist peacefully. Other days are not as easy. He can show up trying to claim more space or make a mess with his things. Although I’ve learned to work around him, I’m always aware of his presence. Now Suicide also knows that he doesn’t own the home and can’t litter my space with his baggage. It also helps that I’ve started using my experience with him to help others who have tricky houseguests.

Suicide prevention efforts are the only way to keep Suicide from entering more homes.